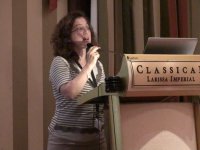 On 29/6-3/7/2011 we participated in the 22nd World Congress of Poets in Larissa. The congress, in which 205 poets from 65 countries participated, was held by the United Poets Laureate International (UPLI). At the conference a speech on the “Universal messages in the poetry of the philosopher and poet Dimitris Kakalidis” was presented.

The speech received very favorable reviews: “this is a poet of today”, “you filled our hearts”, said poets, scholars, men and women of letters that were present. In the poetic evening that took place, poems from Dimitris Kakalidis’ work “Logos the Third” were recited and also members of the Society recited their own poems.

In the World Poetry Contest during the congress venue, in which six members of the Society participated, one received the first world prize in the free verse poetry category with the poem “Marbles in exile”, which refers to the Marbles of the Parthenon.

At the end of the congress, the Responsible of the Society was awarded a prize for “recognition and appreciation of Excellence in poetry” by the congress committee for her whole presence at the congress.

Many of the participants showed a great interest in the Society’s philosophy that inspires the works of the publishing house and in the noble ideas that these worksconvey, and we indeed received many ​​proposals for presenting our work abroad.