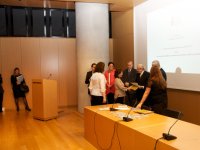 Two members of Omilos Eksipiretiton (the Servers’ Society), Paraskevi Kostopetrou and Victoria Makri, participated in the 3rd International Literary Competition organized by Asociacion Cultural Helenica  NOSTOS, under the auspices of the Greek Embassy in Argentina titled: “The Parthenon Marbles: The history of a looting or the looting of history?” with the short story THE SACRED DANCE OF THE CARYATIDS and they were awarded the third prize.

The award ceremony in Argentina was held on 26 November 2011 at the Borges room of the National Library in Buenos Aires.

In Greece the ceremony was held on 16 December 2011 at the New Acropolis Museum with the presence of the President of the Organization Christina Tsardikos, the Ambassador of Argentina to Greece Jorge Alejandro Mastropietro, the Senators of Argentina Blanca Monllau and Roberto Basualdo, Argentine Senator and Chairman of the Argentina – Greece Friendship Group Emilio Rached, the Greek Deputy Parliament Speaker Grigoris Niotis, the President of the Acropolis Museum Dimitrios Pandermalis, the president of the Board of Directors of Melina Mercouri Foundation Christoforos Argyropoulos, as well as Greek Members of Parliament, writers, representatives of ΕΚΕΒΙ (National Book Centre of Greece) and publishing houses.

The awarded literary pieces were published in an Anthology.